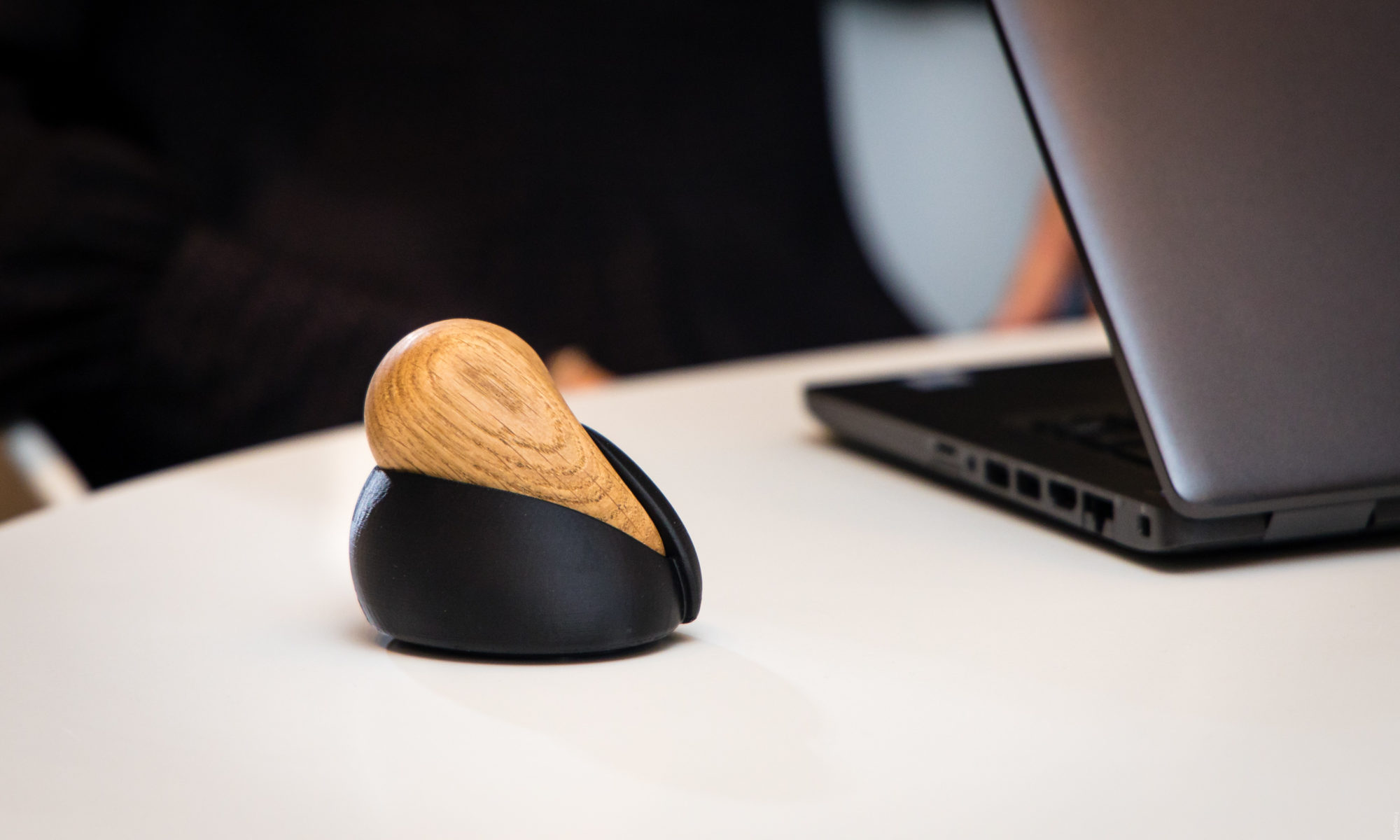 Today, Ope launched a new product, Ope Petrel, a focus tool for the hybrid workplace, made from 100% closed loop marine plastic and reclaimed wood. With Ope Petrel we aim to redraw the line between work and private life, to create a better and more productive work environment for home office workers.

Ope Petrel is a beautifully designed office tool that lets you consciously open and close the workday, build and support healthy work habits, and non-verbally communicate to others your state of mind and availability.

The digital work lifestyle has blurred the boundaries between work and private life. Work extends into people’s homes, and private distractions break up and extend the workday. As new habits form and settle, they become harder to break out of. Even though we enjoy the freedom offered by our digital tools, the merge of work and private life create stress and wear our relationships down.

Strangely, while working from home, communication with our nearest become more difficult. Our bodies might be in the present at home, but our minds are at work. In this state we lack tools for communication with people around us. Out of frustration we might turn to distancing from or even get angry towards our dearest to solve the immediate situation.

“During the design process, I came to realize that Petrel, purely by existing in people’s lives, would facilitate conversations that are fundamental for healthy relationships. Through active use, it gives us a pre-agreed and non-verbal language when situations of overlapping interest accrue,”  says Creative Director of Ope, and Designer Eirik Helgesen.

The coronavirus pandemic has accelerated the remote workplace lifestyle and increased the friction between people at their own homes, that now has become their office space.

“In our time, we have a tendency to turn to digital tools for any issue related to communication or managing our work and private life. But humans are not digital by nature, and our natural tools like expressing and interpreting emotions are far richer than what can be digitized. It was natural to use these tools and investigate the analogue universe of form, association and meaning for our solutions to the challenges of the digital age,” says Co-founder, designer and CEO of Ope, Lars Urheim.

Petrel is a completely analogue tool that rebuilds the patterns of focus and presence in our work and in our private lives. By positioning the drop-shaped wooden handle of the tool, one can anchor one’s own focus, while communicating availability non-verbally to others.

Ope Petrel is indeed innovative, but not only for its functionality. It is a “born circular” product, entirely made from reclaimed materials, and offered in a service model to businesses and organisations, ensuring a completely waste free, closed loop, regenerative value chain. The base of the tool will be the world’s first product made from reclaimed marine plastic offered in a ‘Material as a Service’ model.  Not only is the component made from 100% reclaimed marine plastic, but the model continually finances more clean-ups in the name of the customer. The regenerative-circular value chain itself is an innovation of Ope and the collaboration project “From Beach to Boardroom” funded by the Norwegian Retailers’ Environmental fund.

The service offering that includes the object itself, is the result of a partnership between Ope and Ogoori, daughter company of Ope and Vestre, to beat ocean plastic pollution and pushing for a circular economy where waste can find value again. Norway is a circularity novice, with as little as 2.4% of country’s economy being circular. Still, through Ope Petrel, Norwegian Design paves the way for a new circular paradigm, where economic value creation runs hand in hand with cleaning up nature.

Petrel also demonstrates that ownerless marine plastic is useable and that should be stored in objects to avoid further harm to the environment. In order to safeguard that this plastic does not enter into nature again, it is locked in objects in a rental model and tracked using blockchain technology. In this way individuals and companies can take environmental responsibility through value chain collaboration, and cut the waste to zero in the process.

And zero waste initiatives from the industry is really needed. It is estimated that an overwhelming 8 million tonnes of plastic still end up in the world’s ocean every year, and approximately 65 kg of new furniture is purchased by a person per year in Norway. A study has shown that half of over 10 000 tonnes of microplastic from Norway end up in the ocean each year. Most of this microplastic come from car tires, paint, rubber granules from artificial turf and textiles.

Inspiration for the design and name comes from seabirds, and the base made of ownerless plastic hints to the fact that researchers find plastic in nearly all the bodies of seabirds they examine. The name, Petrel, was inspired from a study by Denmark’s environmental protection agency that was discovered by designer Eirik Høvik Helgesen. The study revealed that more than 95 percent of northern petrels that were found dead off the Danish coast had plastic in their stomachs. The petrel, a seabird, generally hunt for food on the surface of the sea and so are susceptible to ingesting plastic floating on the surface.

Ope’s vision is to see a world where there is a more balanced co-existence between humans, objects and nature. Ope aims to recreate a system that harmonises the interaction between industrial activities and the natural ecosystem by providing sustainable products and services, designed for the circular economy. This will open an opportunity to change people’s habit of consumption and leading them to protect the environment.